For an amateur performance, you may be paid a token sum of money but not a professional fee. This performance might be for a friend’s function, wedding, school show, church event, magic club show or charity event. This is by no means to look down on amateur performances but it is to highlight the necessity for a stricter criteria when choosing your first illusion for a professional gig as expectations from the client/ audience are different. 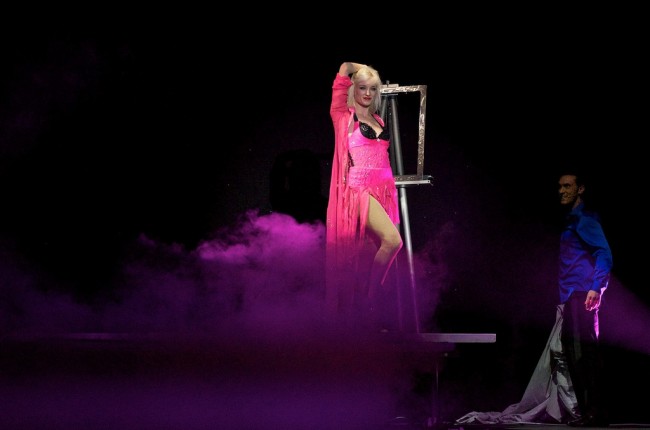 For professional performances, you have a certain expectation to fulfill of your client who booked you or your paying audience if you do your own theatre show. They will be more critical of your material, performance and overall show production value. Overly common illusions performed with little original style may not be enough to impress your paying audience. Your illusion (and rest of your show) should look professional. I am not saying that it has to have to be a chromed industrial-looking prop or a painted box, but an old card box put together with fraying duct tape will not make the cut for most professional performances. The exception would be if you were using a “beat-up” prop amidst a professional illusion set to create contrast. 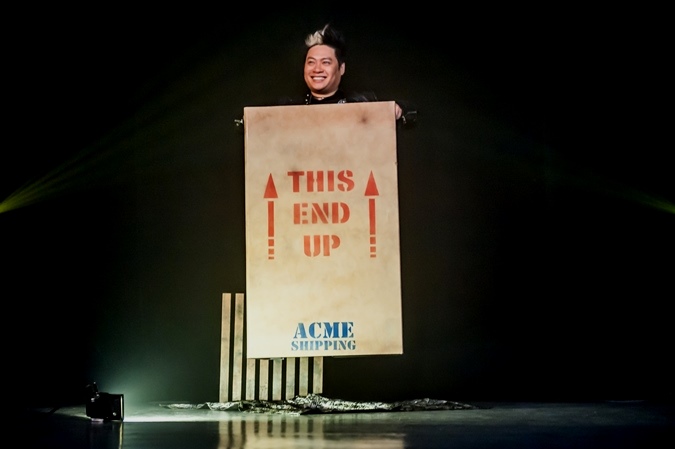 If your illusion is for an amateur performance, you will have slightly more latitude in the look of your props, standard and originality of performance, not implying that artistic quality and standards should or need to be compromised. Makeshift props fabricated with careful detail out of cardboard ala U.F. Grant’s “Victory Cartons” or Andrew Mayne’s “Voodoo Box” will be good enough.

After taking into account the level of performance that you are staging the illusion, basic and practical considerations when choosing your first illusion include:

Here are the three most common recommendations for a first illusion.

The Substitution Trunk. This is a classic Houdini illusion where the magician is locked into a box or trunk. The assistant stands on top and raises a curtain. Split seconds later, the performers exchange places with the magician standing on top of the trunk and the assistant inside the trunk.

The Broom Suspension. Created by Robert Houdin, two brooms are placed vertically under a girl’s arms. The girl’s legs are lifted up horizontal so her body is parallel to the ground. One broom is removed and the girl magically suspends in the air in one broom.

A Box-style Illusion. This refers to any “box jumper” illusion where a girl goes inside a box and the box is speared, stabbed or divided. Examples of such illusions include the Sword Basket or Sword Box, Robert Harbin’s “Zig Zag Girl”, Jim Steinmeyer’s “Modern Art”, Gunther Puchinger’s “Mini Kube Zag”, Jack Gwynne’s “Sword Temple” (also known as the Temple of Benares)  or my “Blade Pyramid” (that is available as a free e-plan if you search hard enough. Hint, listen to one of my audio shows).

These are all excellent illusions in their own right as they are relatively inexpensive, can pack flat or fairly small and can be performed in most conditions.

While we agree these are all great illusions and good starting illusions, not all three are ideal as the very first illusion, especially if you are an occasional performer, part-time professional or weekend warrior. The Substitution Trunk and Broom Suspension are not ideal first illusions. 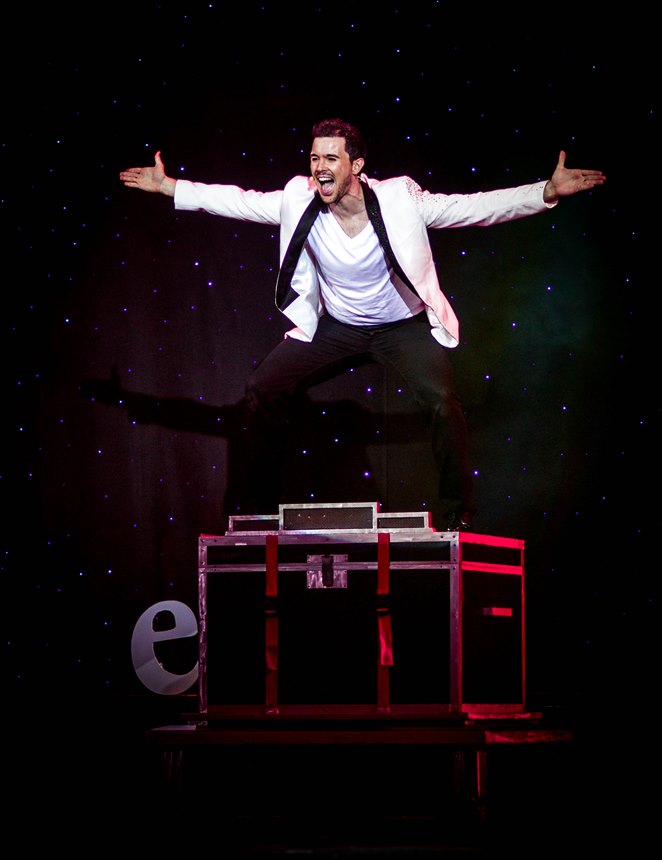 The Substitution Trunk is not a good very first illusion as it requires a lot of time to learn and eventually perfect. It is extremely difficult and physical in nature. If you are not a full-time magician or not full-time into illusions, it is unlikely that you can devote a considerable amount of time to practice and rehearse. Realistically, you may have only two to three days of two hours each to rehearse. And, you would have to coordinate your schedule with your assistant who is not likely to be your full-time assistant. The Sub Trunk requires hours and hours over weeks of rehearsal just to perform smoothly, as such, it is not an ideal first illusion although it is a fantastic illusion for a subsequent illusion after you have some experience in illusions.

The Broom Suspension is not an ideal first illusion for several reasons. First, the method requires a harness that should be custom fitted to your assistant. So, you will need to use the same assistant each time or an assistant of very similar build. The illusion also requires the assistant to have strong abdominal and thigh muscles to keep her body straight during the suspension so that the illusion will look good. If this is your first illusion, it is unlikely that you will have a professional dancer or assistant. You will likely be asking your wife, girlfriend, daughter, mother or grandmother to assist you. If they are not trained dancers or fitness instructors, chances are, they will find the illusion very difficult and even painful to perform. The experience will not be positive and they may not want to assist you after your first rehearsal.

There is another reason why the Broom Suspension is not ideal as a very first illusion due to the lack of production value. When a client books an illusion show, they expect to see big illusion props and flashy costumes. While it is a cliche and, as magicians, we know that the prop does not represent quality of an illusionist, laymen clients are different. They expect production value and see it directly proportionate to the money they pay. A Broom Suspension unfortunately does not have tremendously production value as the main props are two brooms. If this is the only illusion you perform in an illusion show, it might not fulfill client expectations.

This does not mean the Broom Suspension not a good illusion because it is very effective in the right context. If you perform a full illusion show with multiple large illusions, the Broom Suspension is an excellent illusion to put in the middle of the program. Once you have established yourself as an illusionist with the “big toys”, you explain to the audience that you would like to present an illusion with some ordinary items that you found backstage. You then bring out the brooms and present the Broom Suspension. In this context, this illusion plays very well and no client will have an issue with it in terms of lack of production value. 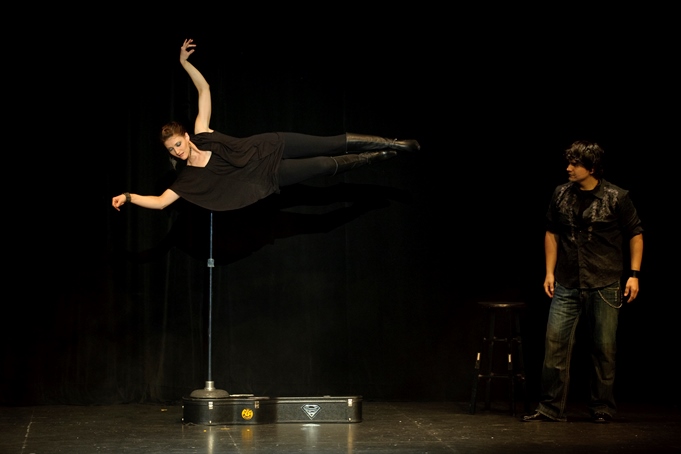 Jason Bishop with a microphone suspension

So, the best first illusion to perform is a box-type illusion. First, the box illusion is also a large prop that will satisfy clients looking for production value. Most box illusions can fit different sized girls so it does not have to be precisely custom fitted to your assistant. You can also learn most basic box illusions in one session of two hours and later make the performance smooth with a few more sessions. Your assistant and you can work out the basic choreography of the illusion and the order of movements in a relatively short time.

Finally, a box illusion will also teach you basic illusion presentation skills, movement, prop handling and choreography. This will help you in the performance of future illusions.

One important point to note about box illusions is that it is very easy to perform them badly. You often hear the criticism that illusionists are “box pushers”. This is because many illusionists (professionals included) perform box illusions very badly.

These include non-magic actions such as opening/ closing a door to a prop, removing a cloth, turning a prop around, taking swords/ spears/ tubes from a stand or stage hand or moving panels, illusion parts or catches. Many performers do not think about how to present such non-magic actions. As a result, these actions are performed without thinking how they look or take too much time to perform. Every non-magic action has to be well thought out and choreographed. The actions must be performed smoothly and with economy of action. That means that any single action should be accomplished with the least amount of movements. In any single illusion performance, there can easily be ten non-magic actions to perform. So, it is critical to ensure these actions are short and look elegant so that the entire illusion performance will be polished and professional. 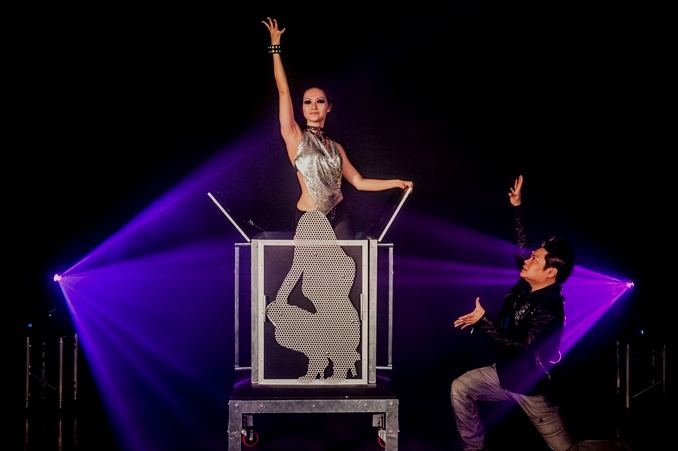 Here are some final first-illusion tips: 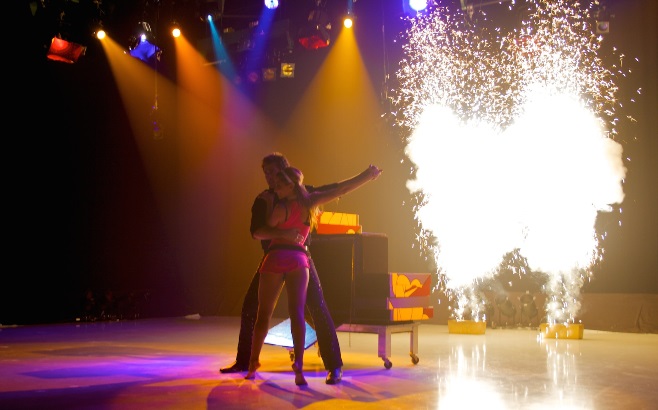 Best of luck with your first grand illusion!