In my previous two entries on the subject of “Why Illusionists Perform the Same Illusions?” and the follow-up, I explored the ‘why’ and urged professional-level illusionists to step out of their ‘me-too’ comfort zones and not present the same illusions in the same way.

Do Not Allow Overly Common Illusions to Dominate Your Show Progam

This is the most obvious technique yet not very helpful if not delved into with more depth.

First, I would like to stress that there is nothing inherently wrong with ‘standard’ illusions. They are standards for a reason because they are audience and time tested. My only issue is that they are overly common which makes all illusionists look the same.

During the peak of their illustrious career, signature illusions that the Pendragons often presented in a show included The Sword Basket, Interlude and the Sub Trunk. The Sword Basket & the Sub Trunk are standards but they made them different with their style and presentation of the illusion.  Interlude (at that time) was brand new and exclusive to them for a number of years. This gave their show a very fresh and innovative feel. Furthermore, the presentation of the illusions were closely tied into their performance characters and style.

This formula will separate your show content from others. This alone will not differentiate as a totally unique illusionist to the marketplace but is an important first step.

Modify the Aesthetic & Functional Design of Your Standard Illusion

I gave specific examples on how various illusionists modify standard illusions so they look different from others off the same assembly line. Most recently, I have rebuilt and add original elements to marketed illusions “360 Sawing” and “Windshear” to make them different. 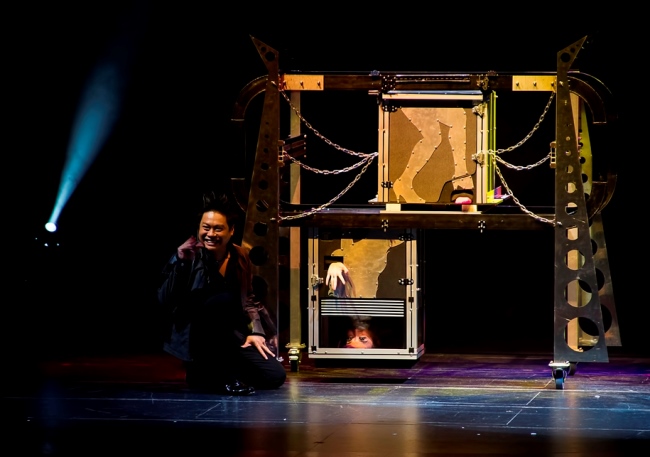 Previously, I highlighted Michael Baron’s “The Device” as an excellent modification of the Mini Kube Zag. Several illusionist such as Hector have made changes to Modern Art in an effort to differentiate the illusion; from making it a one-person illusion, to removing the ‘table’ to having the person’s head extend out of the prop. 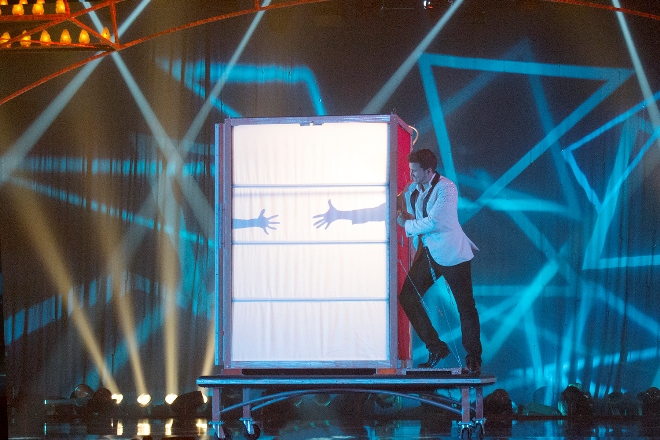 Script the Plot of an Illusion

Think about what story you want to tell the audience. What do you want your audience to feel or experience? Are you performing the illusion to give depth and advance your stage character?

Specifically, I’m talking about thinking about a plot in depth and not just “take a girl, put her in a box, put swords through the box…”.

Thinking about the plot will often give motivation for the illusion and help you add elements to the performance to tell the story. These additional elements include costuming, dialogue (verbal or non verbal), smaller props and music.

Every good story has a defined beginning, middle and an end, although not necessary in that order. Illusion performances are no different. Apply basic storytelling techniques and plots from good movies. Imagine if you could use the plots from “Memento” or “The Usual Suspects” to an illusion performance.

Probably the best example of using plots to differentiate their illusions (and routines in general) is Penn & Teller. Practically every act they perform is a master class of plot and scripting. While it is unlikely that you could create a whole show with this technique (because you are not Penn & Teller), just having one such illusion presentation in your show can make all the difference in the world.

Add a Kicker to the Illusion

This, of course, does not apply to all illusions but is part of the idea generation process. Some purists do not like to put kickers into an act because it becomes all the audience remembers and they forget the actual details of the act. But, the fact is, audiences love kickers if they are not telegraphed.

Think about what possible kickers can be added to a standard illusion you perform. Costume changes and the appearance of a surprise person/ object and transpositions to the back of the performing venue are common kickers in illusions. What else can be done?

Do the Opposite of What has been Done

This is a common creativity technique used during brainstorming. Think about how you can transform, change and radically do something different with a standard illusion prop, presentation or handling.

Make a list or mind map of what is normally done with the standard illusions and see what you can do the complete opposite of in every aspect.

Don’t limit yourself, have fun and come up with the most ridiculous and wild ideas. This is the idea generation part of the creativity process so forget limits at this point. Think about how you can make a standard illusion bigger, smaller, faster, slower, funnier etc.

Some simple ideas to jumpstart your brain:

This is probably one of the most difficult techniques to differentiate an illusion performance because it requires a mastery of another artistic skill or, at the very least, an in depth understanding of how to combine illusion with the other artistic skill.

If not done well, the whole performance can look contrived. Many try to integrate dance into illusions (Copperfield influence from the late 80s) but it has become way to cliched now and unfortunately most can’t dance or look good trying.

Darren Romeo adds singing to illusions as the “Voice of Magic”. Nathan Burton adds comedy to illusions which is not as common as comedy to stand-up magic. Criss Angel’s “Believe” is a combination of Cirque’s take on the circus with Criss’s illusions. Lee Eun Gyeol does one of the most beautiful illusions with shadowgraphy and Chris Murphy’s “Evolution” illusion.

I hope this entry gives you food for thought and use whatever applies to you to differentiate your illusion content.