How do you go about bringing your effects from the eagerly awaited postal package to actually performing on stage in front of a live audience?

With the advent of the Internet today never before has the modern day magician been so spoilt for choice and resources. There are endless numbers of dealers all offering their wares, tempting our palettes and begging us to buy, buy, buy (although most of the time they do not even have to beg!). How difficult is it to make a choice according to your personal budget, according to your wicked temptations, according to the fulfillment of your dreams?

An order is placed and from the moment that order is dispatched, evil impatience is conceived… It seems like endless days until finally that long awaited ring of the bell sounds, and the postman waits on the other side of the door, golden package in hand. A snatch, without so much as a thank you, and the packet is greedily ripped open by the savage apprentice.

A quick scan of the enclosed instructions, a fiddle of the gimmick, a blunder of a practice and quicker than a wave of the wand, the latest novelty is shown to the nearest victim – result:
Mockery, jeering laughter, sarcastic remarks, unexpected comments…

The latest dream has been shattered, the magi’s heart sinks, and another marketed effect is thrown on to the burial heap of unwanted effects, along with last week’s order, and the order from the day before that…

The above is a familiar scenario which we have all lived through, sometimes more than once (In our lives, there is no such thing as “once bitten, twice shy”, our greedy eagerness doesn’t listen to such idioms!).

How do you go about choosing the effect that you will honestly practice until you polish the performance enough to be able to put it into a routine, connect with the other beautifully rehearsed effects, and perform that in your stage show for many seasons to come?

The longer we are in this business, the wiser we get to the advertising of the open-eyed dealers. We turn a blind eye to the multi-coloured language of the advertisements and get down to the real nitty-gritty of an effect before we dare to part with our hard-earned money.

Reviews are an evil in disguise – what suits one person may not suit another. Until you actually see an effect in performance, it is very difficult to imagine with words how the number will actually look on stage, and whether that particular effect will suit your style, or the role in your routine.

Some dealers on the Internet complement their descriptions with on-line videos. I often wonder how long it will take for the dealers to get wise that in some cases this is a good selling point, but in the majority of cases it is these videos that are actually losing sales to some companies!! 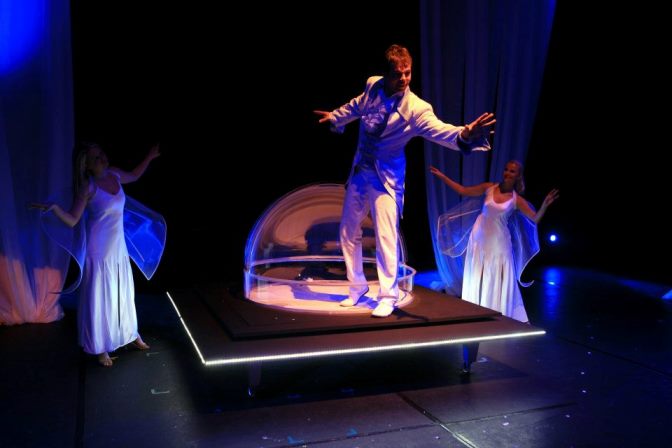 For the last two years running, I have amazed my manager when attending the Blackpool convention from Turkey, and returning home with only a couple of books under my arm. I have attended countless conventions, whereas my manager has only ever been to those two Blackpool conferences. For him, the dealers’ hall was like a Santa’s Grotto, a scene direct from Hogwarts, where you should expect the unexpected.

For me, it was like a battlefield – a place where armour should be worn in the correct places, where blinkers should cover the eyes, and where, at all costs, earmuffs should be kept well over those frozen little shells – not so much to keep the cold out, but in order not to be able to hear the voices of the eager sellers displaying their latest goods.

When do I part with my money then?

Careful planning is the route to me opening my wallet (or rather the wallet of my manager, who has control over all my spending…).

Imagination is the answer to a good performance. Starting from “A” and going to “Z” in a logical, step by step way. It is with this in mind that effects are chosen, “created” and put into a show.

Each and every magician has his own style, his own persona, his own imagination. It is these tools that will help him to bring a purchased effect from the package to the platform, and make him stand out from the rest.

Before “purchasing” comes “planning”…. BUY WHAT YOU NEED!! It is as simple as that. A simple routine built according to the needs of your performance, and the demands of your public are your main weapons when fighting the battle to an outstanding show.

A professional performer needs to look at the financial aspect of investing in an effect. How many times will the number be presented – is the effect a one-off special for a particular group with a particular need? How much are you getting paid for your performance, and how much time will you spend before you can put the item into your act?

A routine performance has a beginning, a middle and an end. The means of getting from one to the other is the result of your careful routining. Personally, for my performances should be as magical as possible. Nothing is just picked up from a table and performed, rather items are produced magically. For example; a silk is plucked from thin air, a cup is pulled from inside the silk, the silk is wiped around the edge of the cup, the cup fills with water, which is sipped, a leaf is blown from the mouth as if choked upon. The leaf is caught, and expands into a sheet of paper. The paper is destroyed, dipped in the cup of liquid, wrung dry, and blown into a shower of … Yes, you guessed it the old “Snowstorm in China”!

Take a look at the structure of the routine. It is far more magical than presenting the audience directly with the sheet of paper. How could they guess what the magical result is when you first pluck the silk from the air?

You have chosen your effect, made your purchase and the required items are in your hands. Before even looking at the items received, firstly read the instructions. This includes reading the effect. The effect is written from the audience point of view, and that is your goal. This is what you want the audience to see.

The instructions are the basis of the birth. Read the list of apparatus supplied, including anything about the gimmicks. At this stage, you are just reading, and not handling anything. Study the instructions and the moves. Learn any sleights before proceeding with the routine. (This may include leaving the effect in hand, and looking at other resources to acquire sleights).

After re-reading the instructions, you are ready to take the props into your hands for the first time. Once again, step by step the instructions are followed. You may, at this stage, want to plug in the iron to warm up, in preparation to iron out any wrinkles that may occur…

The magician’s enemy, the mirror, comes into play here. How does this effect look from the audience’s point of view? Some people swear by the mirror, I prefer the live victims….
A trusted loved one, with the patience of a saint is the best practicing module. Someone who can criticize constructively, someone who has the same aims as you. A fellow magician from the society is always willing to help out when it comes to practice. Make sure it is someone who you respect as a performer, not someone you can’t abide!

Having grasped the principles of an effect, it is time to redevelop and put a signature on the number.

Many tricks these days are sold along with an instructional video. These are fine when in the early stages of practice, as actions DO speak louder than words. However, ignore the performance once the effect has been mastered – such videos have habit of “cloning” magicians.

Take into account your character. Look at the general decor of your props. Ask yourself again, what are the needs of your audience? If you patter on stage, what story will you tell whilst carrying out your routine? What effects come before and after the new item, and how can these be linked? Maybe the colour needs changing? Maybe you can exchange one prop for another. In the example of the Snowstorm above, the fan was eliminated and replaced with the “blow” from the mouth, which originally blew out the single leaf – of course those in the know will realize that my lungs are not SO strong!!

Taking this into account will help develop the marketed number into your own style.

It is a good idea to ask these questions whilst making a purchase too – it will save you a lot of time in the long run.

Novices are bored of their elders telling them to “Practice, practice, practice”…. but never has a truer thing been said. Private rehearsal is the magician’s best friend, next to live audiences.
It is important to put your effect to the test, as often as possible. Seasoned performers are learning just like students in every performance – in that respect everyone is at an equal level.

Putting greed out of the way, and bringing personality to the forefront will help you develop your act in a slicker, more polished and professional way. Thus, making bringing an effect from package to platform a much more profitable pastime!

Lee Alex, born Wimbledon, London 1968, has over recent years built up a reputation to become one of the most popular European acts of its kind.

At the age of eleven when Lee first began to nurture his love for magic, what started as a hobby soon became a way of life. From the very beginning, Lee’s special talent and natural ability won him numerous awards from local and national magic societies.

Lee’s knowledge of magic developed rapidly and for many years, whilst still in normal education, his flair for foreign languages was employed by an international magic supply company in England, where Lee translated magic articles and effects for publication, along with contributing his own original effects and illusions.

Lee’s performing took him all over the North of England for private and public performances – parties, fairs, fringe festivals, hotels, theatres, magic society functions, cruising, television and performing live for listeners over the radio.

Since then, Lee has performed at various venues all over Europe, Greece, Germany, Austria, England, Poland, Portugal, Bulgaria, Turkey, Azerbeycan, Ukraine and at -40 °C in Siberia!

Lee’s original employment of classic effects brought up to date, mixed with creative scenarios have most recently seen him planning and performing at major events for international companies in Turkey.