Halloween is around the corner and magic & illusion shows are very popular during this time.

Some magicians have had great success with performing Halloween illusion shows every year during this season. Ed Alonzo‘s “Psycho Circus of Magic and Mayhem” as well as John Bundy & Morgan‘s “Spooktacular” show immediately come to mind. 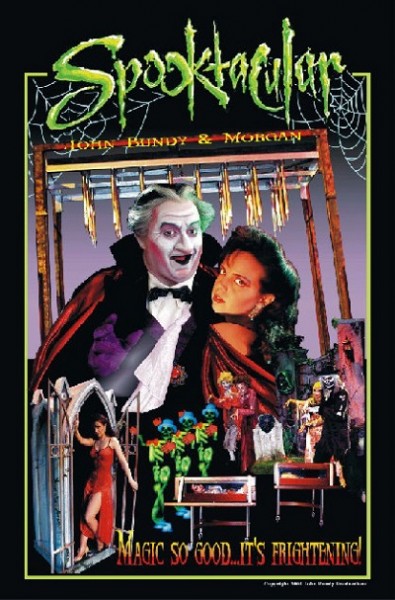 Besides performing, I am also a producer so a large part of my work is coming up with creative ideas to produce customized or themed shows.

In this post, I offer a collection of original ideas for you to add value to your Halloween show and command a premium fee for your increased value.

Before producing your Halloween show, the most important thing you have to do is to identify your target market and audience; as this directly impacts how you produce your show and the content.

Here are a couple of scenarios:

If you are performing primarily for kids and family audiences, your show has to be designed as “play-scary”. The show must be fun and entertaining with some “spook” factor to intrigue the audience but not necessarily terrify them.

If you performing for adults who are ready for a good time, you can afford to be more scary and gory. The extent of your scariness and goriness depends on your personal style and your specific audience.

The venue is also an important consideration. If you are performing at a haunted house attraction, a theme park or club, you have some latitude in being a bit more bizarre, serious and creepy. The main reason is that the venue, sets, decoration and atmosphere lends itself to such a show.

However, if you are performing at a mall, general event or even a corporate event that has simple stage decorations, a full out Halloween show may not play as well.

Once you have determined your target audience and venue, you can start working on your show content.

Depending on how many shows you are doing and how much you want to invest in creating a Halloween show, you can either create custom magic/ illusion props or cosmetically customize existing props. You can tailor the “suitability” of the ideas based on your audience/ venue and stage the magic/ illusions appropriately as needed.

Costuming, music, prop theming, fake body parts and blood can be used to enhance the effects or fear factor. Incorporate traditional Halloween costumes, decoration and props that can be bought from costume and novelty shops. 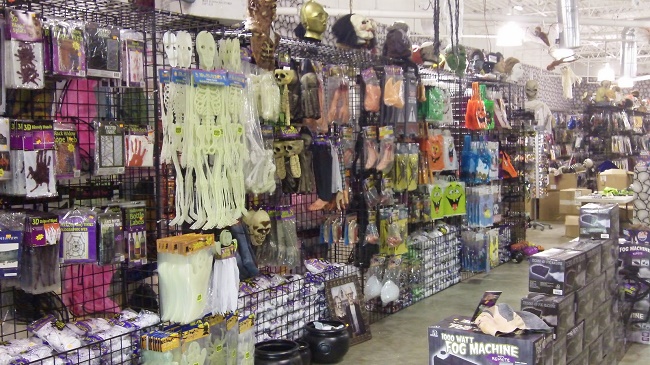 Here are a couple ideas to get your creative juices flowing:

Routines with different versions of the arm/ head chopper are a natural fit for Halloween shows.

Jim Steinmeyer’s “Interlude” body-through-body illusion can include a bleeding-heart-in-hand as the person passes through the illusionist’s chest.

Perform a “Thin Sawing in Half” with fake blood but do not restore the girl ala Richiardi’s “Buzz Saw” routine.

Get a person on stage to check the girl who pretends to be “dead” but opens her eyes, moves her arms and screams at the top of her voice when the spectator touches her hand.

Be sure to stand behind the spectator getting ready to catch him/ her in case he/ she stumble backwards or tries to run off stage with no regard for anyone’s safety.

Routines where something can possibly go wrong and cause bodily harmed can be played up to create a routine full of tension and suspense. Such routines include:

Use any standard production illusion prop to make a monster appear. For example, use a rustic-looking “Tip Over Trunk” to make a bloodied mummy or zombie appear.

Devant’s “Artist’s Dream” combined with a black art vanish of the monster will work very well if you are performing in the right stage setting.

Any spirit effect or seance routine where things move by themselves or create manifestations is perfect for a Halloween show. Besides the traditional spirit cabinet, slate work, rapping hand, ringing bell or self-moving objects, a glass-breaking routine, fork bending or Losander’s “Floating Table” can also be staged as an eerie performance with the right music and presentation.

ROUTINE WITH A CREEPY DOLL

With the movie “Annabelle” just released, such an act is topical and also fitting. 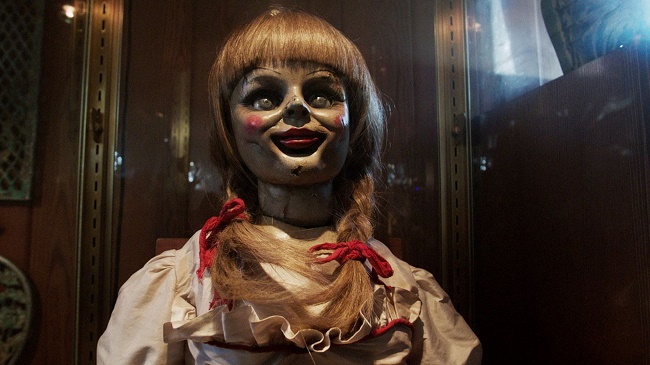 Make a creepy-looking doll for a voodoo doll/ needle routine, an Asrah floating doll or making the doll vanish and reappear using a mirror box, flip over chest or even a large drawer box is effective.

A doll can also be used just as a holder for a prediction effect. The prediction can be in the form of a blood-stained folded piece of paper that is sticking out of the doll’s pocket and held in the hands’ of the doll.

In my book “Pack Flat Illusions for Kids & Family Shows”, I detail an original transformation illusion prop that can be easily designed as a “mad scientist” device where you create a scary doll from various items.

This is a non-scary/ gory idea but fits well with Halloween and gives your show variety and texture. It also gives the audience a break from scary/ gory acts.

You preface a strait jacket escape or any other escape by explaining that Houdini died on Halloween and you are playing homage to one of history’s greatest magicians and escape artists.

Some ideas using Halloween-decorated props include:

A rope routine with a blood stained rope

A “Torn & Restored” routine with a large old photograph depicting a haunted house, person or family

A “Card or Bill in Lemon or Box” routine but having the card/ bill appear on a glass jar of live worms instead.

A prediction routine or Billy McComb’s “McCombical Prediction” using cards depicting different horror movies. A great comic relief moment will be to show a movie card that depicts a widely-panned (bad) movie like Star Wars The Phantom Menace. (After all, Jar Jar Binks is a terrifying character.)

If you enjoyed this article, my routine/ illusion “Spirit Cabinet” is described in “Illusionary Departures” along with 34 other non-Halloween illusions. 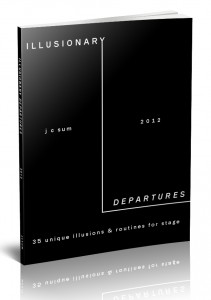