Music is an essential component of any show. A magic show, regardless of the scale of the show, is no different. Choosing the right music for your acts is critical. You need to match the tempo, music, feel and mood of the music to the illusion performed.

The late-Gary Ouellet covered this subject in depth in his excellent book & companion tape ‘Music for Magicians’. I highly recommend this book/ CD set and it is still available from Camirand Academy of Magic. This book will give you sound (pun intended) advice on sources of music and choosing the right music for magicians. It will also walk you through a simple music & sound effects edit session.

While there are multiple sources to learn basic editing and music production, Gary’s book is tailored specifically for magicians with magic examples, making it easy to relate to. This course was released in the early-90s so the discussion on technology is dated but the fundamental principles are still relevant. 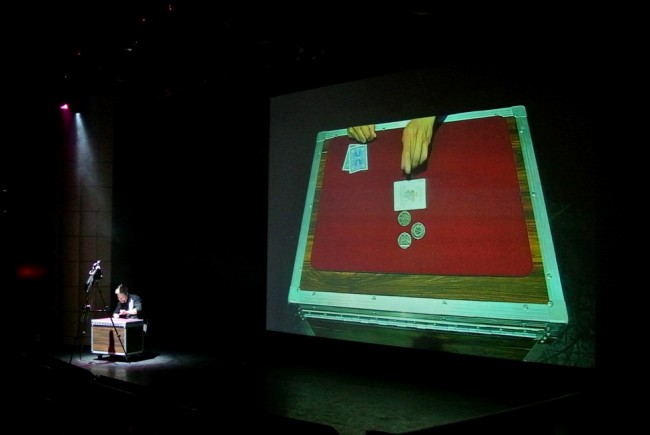 At the most fundamental level, music is used to accompany an act to make it interesting and to communicate the performance feel of the illusion. In this case, music is almost used as an audio backdrop to the act.

At a more sophisticated level, music is an integral part of the act. The music becomes just as important as the illusion itself. With a well-designed piece of music, performed with choreography and precision timing with an illusion, the music enhances the illusion and can also be used to highlight magic moments within an illusion. The music also no longer just serves as a backdrop but helps guide the audience through the narrative of the illusion and gives the audience distinct applause cues.

An example of how music can be used can be seen in an illusion I present dubbed “Impossible Cut”.

Music can also be used to evolve sentimental emotion which is a great state to be in to experience wonder that good magic can create for an audience. Copperfield is a master of matching such music with many of his illusions like “Flying”, “Snowing” and “Portal” to name a few. In the example below, I choreographed a close-up act to a great piece of music to enhance the routine.

Here are some considerations to make when selecting music for your acts:

Having the same monotonous break-beats of a modern soundtrack can get stale if used throughout a 30-minute show. Likewise, even bright symphonic classical music for every act can be too much.

It does take time and a bit of creative evaluation to select a repertoire of music that is varied but yet has a consistent feel to harmonize with the style of the show.

One way to ensure a consistent sound of all your music but still retain variety is to use different music tracks with the same kind of orchestration. So, if the main illusions of your shows are performed to rock music, the rest of your show music can comprise of tracks of different music styles but with the orchestration made up of electric guitars, drums and keyboards.

The late-Joanie Spina offers great advice on music selection for magicians and gives many examples in her excellent video set ‘Getting Your Act Together’. This video is required viewing for all stage magicians, especially illusionists and their assistants. Bear in mind, this video was produced in the mid-90s and it does feel dated in production as well as the style of choreography; however, Joanie’s fundamental advice is still very sound. However, you may need to do some hunting to find her DVDs now.

Music production for your show starts with finding the right music for your acts. Briefly, your source of music can come from:

I personally use and have used all the above sources with great success but you will have to research and invest in what you think is best for you.

You can listen to a sample of music I currently use in my show (2014) below via online stream or here: