Before an illusion makes it to the stage in front of a live audience, there is a process of producing the performance so that it gets to the point of being stage ready.

Every illusionist has his/ her own approach to producing an illusion performance. While I cannot speak for anyone else except for myself, this article explores the process that I adopt. It has been refined over years of professional performing and maybe you might find something of value that you can apply to your own illusion production process.

We have three stages of our process:

Pre-production is done before we physically fabricate or order the illusion.

I create the conceptual storyboard and think how I can make the performance and presentation of the illusion “ours”. Specifically, I try to design elements or sequences that are original and make the performance unique. I never intentionally perform an illusion similar to anyone else in the world.

Personally, I can’t see why magicians will spend so much money, time and effort just to perform the Fire Cage/ Fire Spiker/ Suspended Animation like Hans Klok or the Wakeling Sawing like Mark Kalin & Jinger or the Sub Trunk like the Pendragons did or Snowing like Kevin James.

While it is impossible to create exact refinements and performance twists without the physical prop, I am experienced enough to know what will generally work and often come up with several “outs” in the event things don’t work out. There have been times that I had to do complete reworks because the mechanics of the illusion did not allow me to perform it the way I wanted. But, this is rare.

The point is, I plan out the entire performance of the illusion from the starting pose to the finale pose, choreography, movement, design, lighting, special effects, modifications and extra props before I even get the illusion. This is written down and even drawn out as a storyboard most of the time.

Pre-production also includes music selection and design. Music selection alone can take weeks. If I’m lucky, I find a piece after 12 hours of searching. Thank god for the Internet! Traditionally, I would have to spend hours a day at Borders or HMV sampling music. And later, when I shifted to licensed music, it would be a game of hit or miss with production music libraries.

After selecting the piece of music I want to use for the illusion, I lay out the track and edit it with a music editing software. I design the music based on our conceptual choreography of the illusion and design specific moments in the performance which must change or build up. It is during this time that I also get a gauge of the duration of the performance.

Pre-production generally takes between one to two months.

Besides making practice and rehearsals more productive and efficient because I do so much work in pre-production, it also ensures I am making a good investment as we have mapped everything out.

In fact, I have not followed through with illusions because my pre-production work did not convince me the illusion was worth the while or was different or good enough to add to the show. 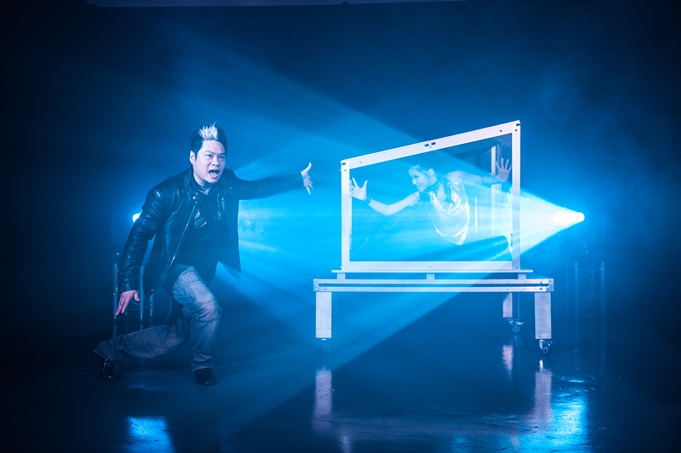 The practice sessions refer to the learning and practicing of the illusion method, handling and technical movements of the illusion. This is akin to learning sleights required for a card routine. Repetition, review and fine-tuning is emphasized during this period.

Practice for illusions also includes blocking through the choreography of the illusion, stage movement, stage set-up, economizing actions and timing the performance to music (that is edited and fine-tuned as necessary).

All bad habits are eliminated in this early stage so they do not set in later when they are harder to break.

This part of the process requires a structured approach and is generally broken down over several days or two weeks, depending on the complexity of the illusion and assuming I am practicing at least 4 days a week.

I set milestones and generally break down the performance into three parts. On the first day(s), my goal is only to learn and practice the first part of the illusion. Subsequently, I reach the other milestones.

If working with a partner or assistant, I also set aside time for individual practice sessions for specific parts of the illusion before coming together as a team to practice.

Practicing is done in front of wall length mirrors in our studio, similar to mirrors in a dance studio.

So, the learning and practicing of the illusion is progressive and not rushed. I found this to be the most productive and effective way to practice an illusion.

Rehearsals start only when practice sessions are completed. By this time, the technical handling and choreography must be mastered and everyone must be familiar with their individual roles.

The goal of rehearsals is to perfect the performance of the illusion and make it artistic/ entertaining. The choreography is also tightened so that there is no wasted action. Music is edited as necessary to reflect the changes. Sound effects and sound beds are also added in to enhance the performance.

If stage crew members are needed in the performance of the illusion, they are involved in the rehearsals.

Rehearsals are no longer performed in front of the mirror. This is so that we do not become mirror dependent. Many times, performers who only rehearse in front of a mirror develop a dependency or comfortable zone with the mirror. As such, when they perform in front of a live crowd for the first time, they freeze up or get lost because they cannot see themselves. Instead, rehearsals are filmed for review so that adjustments can be made.

Depending on the complexity of the illusion, rehearsals take between 2 – 4 weeks.

My typical entire production period for an illusion is about 3 – 6 months, not counting the build time or delivery of an illusion, if purchased from a builder.

However, an illusion can also take years to get from plan to stage. For example, I have a completely original theatrical illusion act, different from anything I have done before, but it will take maybe three years to complete. I came up with the first design in 2011 and it went through at least a dozen changes and redesign. I finally settled on the final design (in 2013) but due to my busy schedule, will likely only be able to build it next year.