For many event magicians and illusionists, performing at weddings is part of the job. In this article, we explore what are the best illusions for weddings and if illusions are even the best way to go.

Regardless of whether you are performing a short act, a full show or just one custom illusion, it is important to understand the purpose and psychology of a magic performance at a wedding banquet.

The purpose of the event is to celebrate the marriage of the couple. Unless it is a very unorthodox wedding banquet (and I have done a few of those), the event will have all the usual formalities and festivities. If you are booked to perform on stage, it is because the couple wants to add some spice and novelty to the otherwise traditional banquet.

The decor and stage setting will generally be tailored to a wedding or romantic theme and the stage size itself may be limited or you have to share it with a band.

Ultimately, the focus is and should always be on the wedding couple and your job is to make the occasion even more memorable or special. Your show is not to prove that you are the world’s greatest magician.

Due to the nature of the event, all the material must be tasteful and even sophisticated. Your set of “Run Rabbit Run” or “20th Century Bra/ Boxer’s” should probably be left at home for this show.

Regardless of what you perform, the highlight of your performance should always throw the spotlight on the couple. This can be done in several ways: 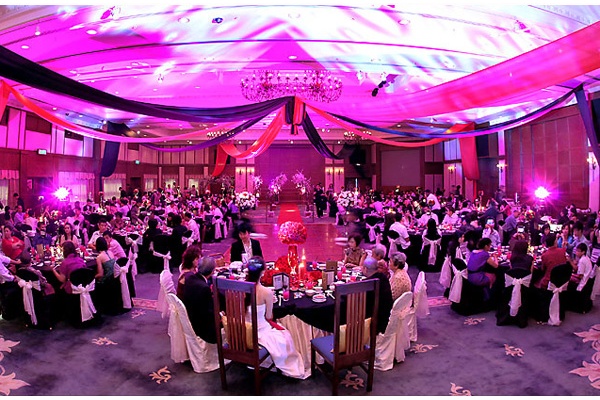 This is a common request from wedding couples but is also one of the most difficult illusions to pull off for most weddings.

Here are some of the challenges you have to consider:

My suggestion is to stage an appearance for a wedding only if:

Some illusions that would work (assuming staging logistics are not an issue) include:

Over the years, I have made a wedding couple appear several times. I have used several methods but most often relied on my “Backdoor Appearance” described in “Illusionary Departures”.

This illusion allows you to make one or two people appear on an open-frame platform within a four-sided curtain on the platform. It requires about 10 – 15 minutes of practice on the part of the people appearing and they can wear almost anything they want.

My “Flash Blinded” illusion, which is essentially a very practical “Flash Appearance” can also fit some wedding settings.

Make a Symbolic Item Appear to Highlight a Significant Event

Instead of making the wedding couple appear, you can make a symbolic item appear that holds meaning for the couple. It could be a piece of jewelry, movie ticket, a photograph or a stuffed toy etc.

You could also make a number of items appear progressively ending with the largest or most impressive production.

If it is a 3-dimensional item, you can use an array of production devices on the market depending on the size of the item.

A mirror box, drawer box or dove/ duck pan can work well if decorated to fit the setting. A doves to rabbit cage can be used to visually transform one item for another.

My own Teddy Bear Box from “Pack Flat Magic & Illusions for Kids & Family Shows” (also described in “3 Sides of Magic”) will work well as it is a magical production from an innocent-looking gift box.

If it is a 2-dimensional product like a large photo or poster, a production frame will work well. A Sand Frame or Flash Frame will do the job but a simple gimmicked photo frame that is taught in Mark Wilson’s Complete Course in Magic is very effective.

In most productions, you can also involve wedding couple and have them talk about the symbolic item(s).

Interactive Illusions that the Couple can Perform

Not all illusionists may be comfortable doing this, but if you have a “simple” box illusion that can teach the bride and groom to perform, it can make for a very entertaining presentation.

For example, if you have an illusion where the groom goes into a box and the bride divides him in half, this can be very entertaining with the right presentation.

Naturally, you would need a custom-sized illusion built for a male. But, if you do a lot of weddings, this can be a great sell.

For these illusions to work well for a wedding, they must be presented in a fun, tongue-in-cheek manner. The actual illusion is not that critical as long as it is deceptive. It is how the presentation is framed that makes it effective.

For example, Mak Magic’s “Flaming Head Chest” can be put over the groom’s head and the bride can place the flaming torch through the side. You highlight that this is symbolic of the groom is willing to do anything for the bride. You can then open the prop up to show that the groom has “lost his head”.

The great thing with an illusion or illusionette like this is that it requires very little rehearsal and you can facilitate the performance of the entire illusion. You can guide the couple step by step while keeping the pace of the performance tight.

Instead of an illusion, if it is not a huge crowd or you have a live camera video feed, consider stage effects or routines that fit the occasion and play big.

Some effects that come to mind include Kevin James’ “Floating Rose”, a Ring(s) in Nested Boxes or a jumbo version of Doc Eason’s “Anniversary Waltz”.

A prediction routine that involves the couple as well as the audience can play very well. For example, some things to predict include:

As you can see, the entertainment value can be high if you pick the “right” prediction items and encourage the audience to come up with funny answers.

Dick Zimmerman’s “Master Prediction Chest” is a logical solution but expensive. Consider the simple but seldom-used chair envelope switch where the prediction is in an envelope taped over a ribbon that is stretched high across the stage. This is described in Annemann among other sources. I actually recommended this to a magician for his own wedding.

The next time you are booked for a wedding and are asked to stage an illusion, you now have a bank of ideas to draw from.