In a previous article, I shared how I redesigned and completely rebuilt an illusion.

In this post, I share my approach on how to create a stage magic act from concept to stage. Maybe some of my ideas and techniques will help you in the development of your own act.

The basic traditional (over-simplified) approach to creating a stage magic act is as follows:

Here are some other approaches to creating a stage magic act:

Early in my magic life (cira 1993), I had little success creating any decent general magic or manipulation style acts. My mind could not think in that way and I did not have the acumen for manipulation creativity. I remember attempting to put together a classic card and coin act. Although I spent hours a day practicing the sleights and techniques, the overall act was amateurish at best.

However, luckily, I was strong in developing motivated presentations for talking routines, close up routines and even illusion performances which I found more logical in terms of structure and motivation.

Between 1997 – 2005, I did produce and perform two general magic acts that served as opening acts for my shows. They worked well to open my show in terms of capturing an audience’s attention but were not earth-shattering by any means.

In 2012, I started to develop a new stage act to complement my full illusion show.

I wanted a specialty act for a variety of reasons. The main reason was to push myself to create something completely different from all the illusions I had designed before. The other reason was to have a portable act that could be performed internationally without having to freight-forward large cases.

Using one of the common approaches to creating an act, I set my sights on a silk act as it could pack small and play big (although a pain to reset). A silk act was not commonly performed as a specialty act and I had a few ideas to give a traditionally “soft” act some edge and excitement.

Over the course of a year, I actually put together a solid act with much time, money and effort put into developing the act. However, the act was not fulfilling a lot of the requirements I set when developing new acts, shows or illusions.

As a commercial performer, having a differentiated product is very important, especially at the international level. I discuss this in detail in the chapter “Good to be Great, Great to be Different” of my book, The Showbiz Master Plan.

So, the question is: “How do I know if I am different or what I do is different?” I have a simple test that I call the intuitive test, also known as the “duck test”. If it walks like a duck, quacks like a duck; it is a duck.

Follow what your gut tells you when you watch something. For example, if you are watching the performance of a singer; ask yourself these questions. Does anything feel familiar? Which parts of the performance reminds of you of someone else’s (or everyone else’s)? Does the dressing, style or image feel different? Does it feel like a “copy” of what other popular successful artistes are showcasing?

All you need to be is honest about how you feel and be knowledgeable with what is already out there. Sometimes, you can’t really put your finger on why something is different but that is why I emphasize, “feel”. The individual differences may be minute and only feel different as a collective.

The questions I asked myself when developing my stage magic act were:

I also had additional self-imposed requirements for the act, such as:

While the silk act was solid, it was not ground-breaking nor was it highly differentiated or unique.

From a magic perspective, it had bubble gum moments but there was no premise and had little meaning to the magic beyond the magical productions and transformation of colourful silks. There was also an element of “old-fashion-ness” that did not gel with my brand.

From a mainstream commercial perspective, it was not newsworthy nor would it advance my career or increase my bookings significantly.

However, I continued working on the act for the next year and a half, all the time looking for a breakthrough.

I used a custom designed show case for the silk act and one day my instincts as an illusion designer kicked in. I visualized a frame built atop the case and the idea of the iFrame was born. I also employed a well-known but little used principle in illusions; especially when applied to the case table I had designed.

The basic idea was to work all the silk effects around the frame. It actually worked well and gave a whole new dimension to the silk routine. However, I also saw the potential for the new illusion prop and that it would be a “waste” to confine the act to a silk act. The inherent design of the illusion allows for a large variety of effects as it is essentially a very versatile illusion utility.

Almost immediately, I saw the potential of combining the illusion with tech devices to create a technology illusion act.

Up to this point, I had no interest in jumping on the iPad/ iPhone magic trend which was largely popularized by Simon Peirro at that time. The main reason was because it is difficult to look different performing iPad magic. It generally looks all the same. The magician holds an iPad in his hand, objects appear and disappear from the screen to his hand.

However, two magicians who have made an iPad magic act look different for stage are Keelan Leyser and Jamie Allan. And I would be remiss if I did not acknowledge Marco Tempest who has been presenting technology magic for his entire illustrious career, even if not exclusively using the iPad.

With the iFrame, I knew that any iPad/ smart phone magic I present would look different, especially when it is just one component of the overall act.

By the end of 2014, I was designing the first version of the iFrame, getting all the different components together and structuring the effects. 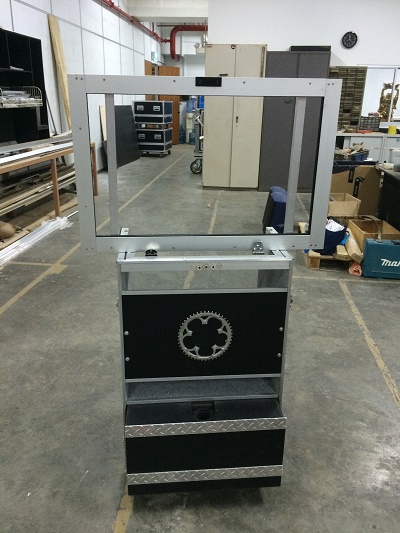 First version of the iFrame in the workshop

I worked out the first half of the act which centers around the iFrame and digital magic. It was designed to be fast paced with many effects per minute. However, there is also a logical progression of effects.

A credit card is selected and pulled out from the iPad and it is used to make a $100 appear. This $100 bill is printed from an iPad, then multiplies and finally vanished from the iFrame.

When designing the effects, I did use a similar formula that some stand-up comics use. While they strive for the maximum laughs per minute, I was looking at “moments” per minute. Notice I wrote “moments” and not “magic moments” as I count any interesting or intriguing visual moment.

A significant amount of time was spent designing and creating the digital magic. The music for the act was chosen after developing the act and was spliced together from three different tracks. 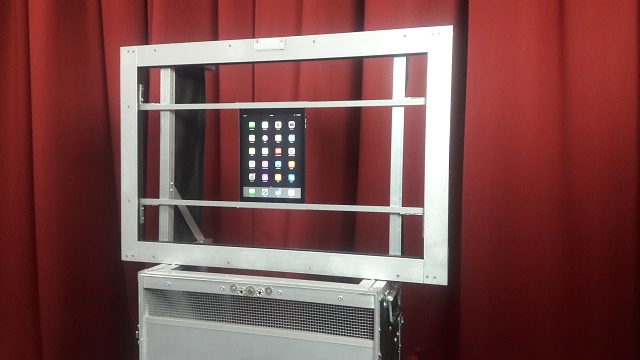 A later version of the iFrame (front cover not shown)

For the second half of the act, I approached it very differently. I wanted a narrative and an act that built to a final climax. It was much more deliberate and slower paced. I knew what the premise would be and how I would get there from a technical standpoint.

The basic plot would see me creating a painting/ drawing magically using the iFrame as an easel and an iPad as an interactive device. The actual painting/ drawing changed several times and after weeks of brainstorming, I settled on a tree. 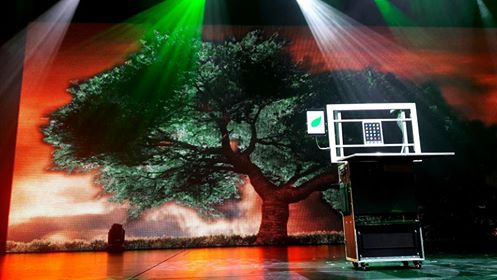 All the other effects and elements were developed around the premise. I had the music track chosen before I had even developed the act as I used it for another act which had a similar slow-build structure.

During the development phase, I had two prototypes of the iFrame built. The technical aspect of the prop design was not particularly straight forward. While I designed it on paper, a fair bit of adjustments had to be made in the workshop.

After everything was built and finalized in wood, the prop was rebuilt from ABS honeycomb plastic to reduce weight. The entire act can be packed in one ATA case but is split into two packages to keep weight down for each piece.

The final design elements of the act were the multiple interactive video animations that I sourced for and edited as a backdrop to the act.

The act was practiced and rehearsed throughout 2015 and went through multiple changes including more design changes in the prop and digital magic effects in early 2016.

It went through a fairly long period of improvement based on self-evaluation and video rehearsals. There were constant changes to the effects and techniques in the bid to make it tighter and better. I also sought feedback from magicians around the world and held a private showcase in my studio for a small groups of people, some of which were magicians. 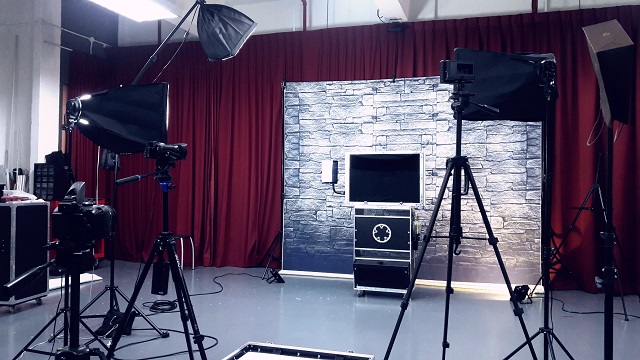 iFrame being filmed in my studio for rehearsals and review

Every performance is currently still being filmed and reviewed to make tweaks and adjustments. My main effort now is to refine the act in terms of movement, poses, choreography and eye contact (where to look at specific points in the act). 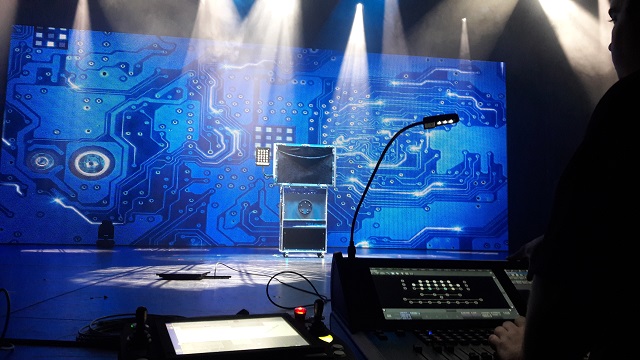 Lighting the iFrame Act on stage

The version I am performing now is officially Version 3.0 (although it is more like version 30). It is a distant echo of the first silk act I produced 4 years ago; although an element of the silk routine still remains in the iFrame act – the very first effects in the act.

You can watch the full act below.

Some lessons that can be learnt from my experience include: 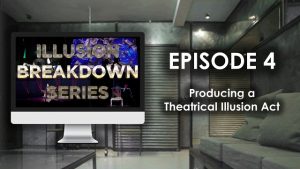