I recently shared an experience where I lost my illusion show due to a mess-up by the shipping company and how I created and produced a show in 5 hours to perform the same night.

This post was very well-received and I have also updated it with a photo of Simon Lovell’s “Heartless Deck” which I made in place of Danny Korem’s “Omni Deck”. You can check it out here.

Based on the popularity of that post, I will share another similar incident that happened a few years ago when I was booked to perform in Budapest, Hungary. Ah… the joys of being an international illusionist. 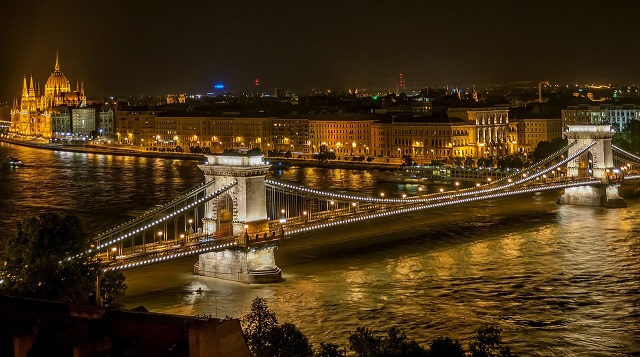 The engagement was for a one-off corporate event and I was booked for a 15min show. As it was a relatively short show, I only shipped over three cases of illusions.

The props were air-freighted from Singapore and arrived in Budapest two days before show. Shipping was handled by the client.

My team and I flew into Budapest a day before the event. However, upon arriving at the venue, we were told by event organizers that there were issues with getting the cases through customs and they were misplaced. At that time, it was unknown whether the cases would be released by the next day in time for the show that night.

I assessed the situation and knew that an illusion show of some kind had to be staged. I had some stage magic props with me as this was carried on check-in luggage but there were no illusions.

For one-off corporate & special events, it is just one show and if a client books you for an illusion show, they expect an illusion show. Unlike a regular show in a permanent venue, cruise ship or attraction, there is no chance to cancel the show or offer a substitute and make it up at a later date. For one-off events, not performing the show essentially is a breach of the agreement and will cause problems for everyone. It is not an option.

In this particular case, there was a bit of time, unlike the other experience I blogged about where the show was the night I joined the ship. I had a dancer/ illusion assistant and a show caller (who could double up as an onstage crew or secret assistant if needed). I also had some stage magic props to work with. So, I had quite a lot to work with and reasonable lead-time, considering the circumstances.

As there was a possibility that my props would not be released in time for the show, the client asked if I had a plan B. I assured the client that I did and started scouting the event venue to see what I could design on the spot. We then went around the event venue looking for possible props or things to use to build or create a few illusions.

I toyed around with a few ideas before I stumbled upon two steel trolleys with frames that were used to house and move portable stage pieces and steps. They belonged to the contractor who was building the stage set.

I came up with the concept and design of an instant penetration illusion with the trolleys as well as another appearance illusion that I could put together with a little time. I knew I would have the help of the contractors on-site and could put together simple structures with wood and cloth as needed.

The effect of the main illusion is a penetration/ transposition illusion between two solid panels from one trolley to another. We called it “From Buda to Pest”. 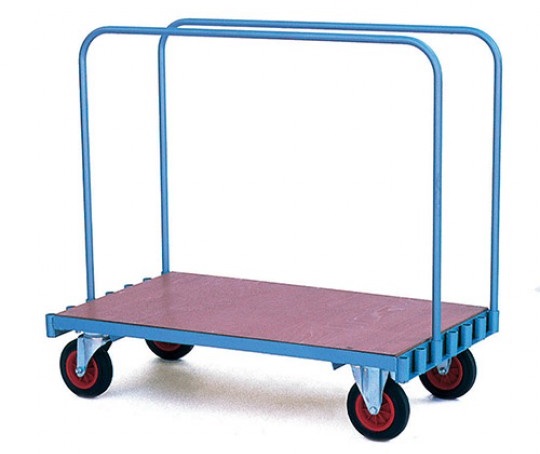 With the knowledge of a workable main illusion concept and a show, I assured the client that the show will go on and that I would perform an illusion show.

Over the next two hours, my dancer/ illusion assistant and show caller worked out the exact choreography of the illusion. Besides the technical handling, we worked out the timing so that I could edit the music accordingly.

By the end of the day, we had an illusion show that we could deliver if needed. The show was not completely built or rehearsed at this point. The thinking was that there was a 50/ 50 chance that I would still get my props the next day so we decided to wait till 9am the next morning. In the event there was no news that the props would be released that day, we would go ahead with the makeshift show and spend the entire day building and rehearsing the show.

As luck would have it, the props cleared customs first thing in the morning and we did get them before noon. The original show with my own props went on as planned without a hitch.

While I did not get to perform “From Buda to Pest”, it was a good exercise. I also detailed the plans for this illusion and it is now available as a downloadable digital plan along with “The Blade Pyramid” in my “Illusionist Starter Kit”, available from the Illusion Bookstore. 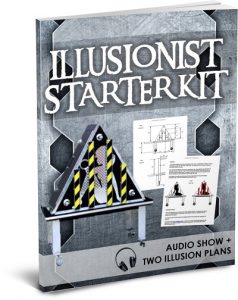 HOW TO CREATE AN EMERGENCY ILLUSION SHOW

Next, comes the ability to be able to improvise and recreate the illusion without the luxury of a full workshop or a wide variety of materials.

In most cases, a learned mind can recreate some illusions with items found around a venue or hardware store. In some cases, a new method/ effect based on old premises has to be created as with the “From Buda to Pest” example above.

I suggest reading books such as UF Grant’s “Victory Carton Illusions” and “Grant’s Illusion Secrets”. Andrew Mayne has a number of books and booklets with ideas on DIY-style illusions.

I have a couple of books and plans that will also provide a good bank of ideas including “Simple Showstoppers”, “Pack Flat Illusions for Kids & Family Shows” as well as some solutions in “Illusionary Departures 2012”.

If you are looking for starter ideas, the above-mentioned “Illusionist Starter Kit” and the “Inexpensive Illusions” plans are nominal investments.

Experiment with cardboard cartons, duct tape and cloth in the privacy of your home or studio. Learn how to create different illusion effects and gain familiarity with moving large boxes and manipulating cloths. This will put you in a position to create a makeshift illusion if needed.

Hers is another tip if you really cannot build an illusion, you can try to put together multiple large-scale stage effects. Props like a “Squared Circle Production”, “Drawer Box” and “Take Apart Vanish” can be used for productions, vanishes and transpositions.

I share a lot of original DIY large-scale stage effects in my book “Pack Flat Illusions for Kids & Family Shows 2”. This is the sequel to the best-selling predecessor. While the presentations are geared towards kids and family shows, the designs can be adapted to almost any show.

To project scale, hire local dancers in matching costumes to assist you on stage. Three or four experienced professional dancers who know how to move and present on stage can do wonders to add scale to a show. Experienced dancers also learn very fast which is a plus when you have limited rehearsal time.

If you are using large-scale stage props, the dancers can bring in and out the props, display them and assist in the execution of the effect. 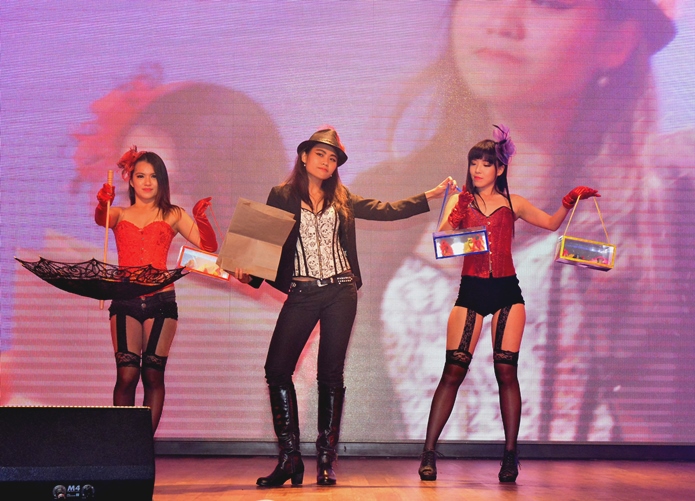 Here is a possible effect you can put together inexpensively that will look really big.

Have two dancers on stage and use stage production props to make various articles of a lady’s clothing magically appear. Next, these clothes are placed into a giant-sized makeshift production illusion that is first shown empty. A girl is then magically produced wearing the clothes. If performed against a LED wall, the graphic of a boutique can be put up as the background scenery.

Here are some other examples how dancers can help make other stage effects and routines play big:

If you are doing a rope routine, have two dancers stretch out the rope across the stage.

If you are revealing a prediction from a large envelope. Have one dancer hold the envelope while another removes the prediction and displays it like a boxing or MMa “ring girl”.

If you are performing a classic snowstorm in China effect, have different dancers each hold the different props for the effect. For e.g., the glass of water, box of tissues, fan, chopstick etc. When you make the “snowstorm” appear, have each of the dancers hold fans, kneel elegantly around you and fan upwards adding to the strength and spread of the “snowstorm”.

If you are presenting a manipulation or general magic silent act performed to music, you can have the dancers pass/ take props from you and frame you when you perform. When framing you, they are essentially in the background so that all focus on you. They should be watching you, gesturing to you at appropriate moments and even reacting/ applauding at applause cue moments. Other than that, they should be poised, enthusiastic and be part of an aesthetic pleasing scenery for the act.

I will end this post as I did the previous one:

While I wish you will never be faced with a scenario where you have to create and perform a show from nothing on short notice, with good knowledge, creativity, experience but most importantly preparation, you will be able to get out of the most challenging situations. 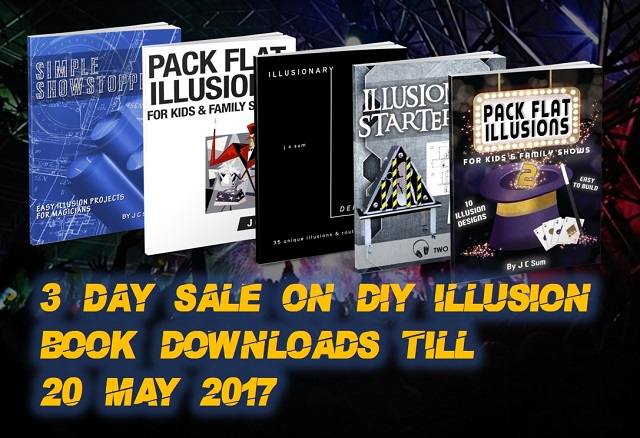 Check out the 3-day sale going on right now for selected titles.