Two days ago, I flew into Japan to join a cruise liner that I am headlining for 3 weeks before I move to another ship. A month before, seven flight cases of equipment weighing just under one  volumetric ton was prepared to be freighted to the ship. 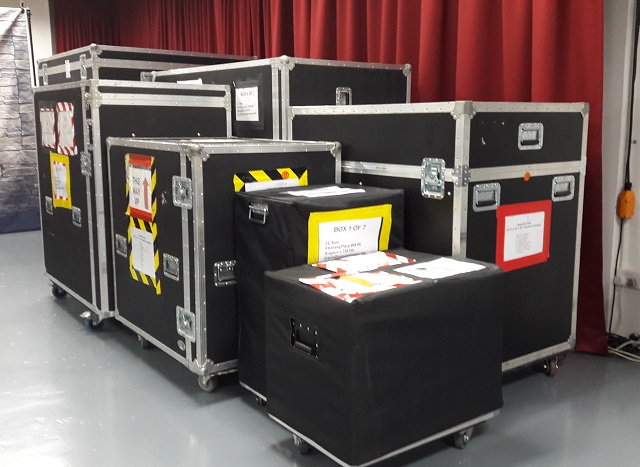 When I boarded the ship, the first thing I saw was the schedule which had me performing that very night. Darn!

It is very tough (and tiring) unloading, setting up, lighting and rehearsing a full illusion show in a single day and performing it that very night. I have done it before but it is challenging and requires a professional support team. There must also be no technical hiccups that will cause delays.

I checked in with the production manager to check on the rehearsal time and soon discovered that my gear was not on the ship. In fact, he was not even aware of the shipment due to a mess-up from the logistics company from Miami.

Due to no fault of my own, I had no show to perform that night. (The cases have since been found, although is still not with me).

To be honest, I was not upset or stressed. For a moment, it did flash across my mind to cancel the show, but my show was already in the public schedule and announced for that evening. While not impossible, it would be difficult and inconvenient for the ship to cancel my show at such a late time.

As crazy as it sounds, the easier thing for all involved would be for me to create a show from nothing. Yes, I believe in utilitarianism and decisions must be made for the greater good.

I also believe that it is scenarios like this which is why I am paid as a professional entertainer. My job is to provide an entertainment solution and not be part of a problem. So, my job is to stage a good show, regardless of the offstage circumstances.

After thinking about the situation for a few minutes, I decided I was game for the challenge to produce a show for a 1000+ seat theatre in less than 9 hours. 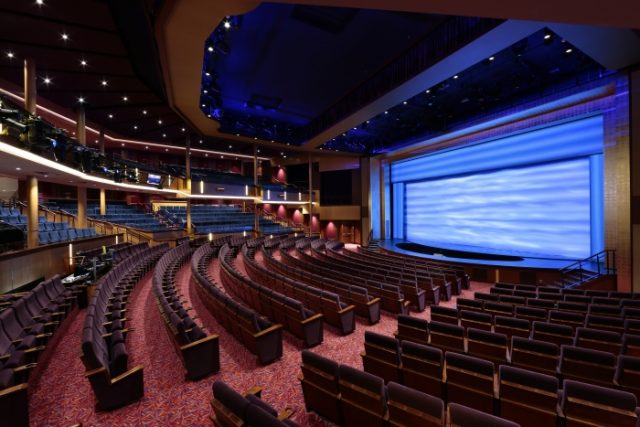 I called back the production manager and said I would be heading into town to shop for and build a show for that night. He laughed, thanked me and said “good luck”.

It was just after 12pm and rehearsals with the production team was scheduled at 6pm. Showtime was at 9pm. I moved up the rehearsals to 5pm as I knew it would take at least 90min to light the show. I also had to settle all the sound, motion graphics, staging and video logistics needed for the show. Bear in mind, this is also my first time working with this team.

That left me with just under 5 hours to create, produce and practice the show.

I spent 30 minutes planning the show and then headed into town by taxi to a department store to look for “props” to build the show.

While I had a good idea what I needed, I also knew that I would be inspired and would come up with ideas as I walked through the shop. After circling around the store about half a dozen times, I bought all the “props” I needed for the princely sum of US$50.

When I got back on the ship, I started crafting the “props” needed for the show, which comprised mainly of cutting, painting and gluing. 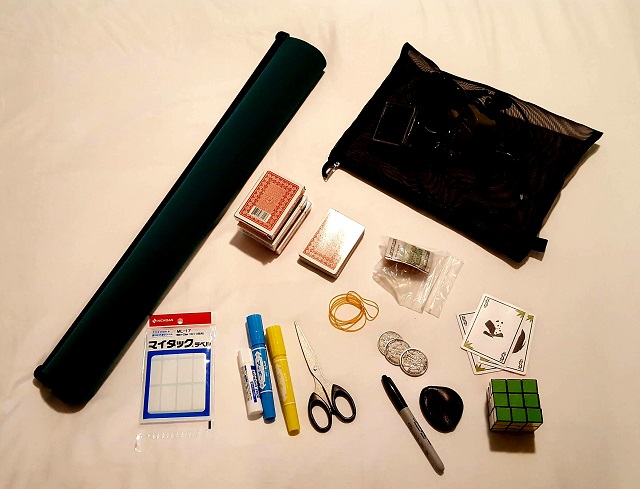 The next hour was spent practising the show and scripting the show. This challenge was compounded by the fact that the show was presented entirely in Mandarin, my second language. However, in the grand scheme of things, this was relatively simple.

Finally, I had to edit and arrange music, type up new sound & lighting cues and edit motion graphics for the video wall.

Minutes before 5pm, I loaded all the digital media from my laptop to my flash drive, gathered my “props” and headed to the theatre for set-up and rehearsals that lasted two and a half hours.

Tired, I headed back to my cabin for a shower and to suit up and make up.

It was back to the theatre for final checks on prop placements, set-up, and to be “mic-ed” up.

At this point, you are probably thinking that this doesn’t sound like a very probable story; plausible… maybe. After all, how could it be possible to create a show from scratch in such a short time?

First, I am by no means the first magician or illusionist to be in this situation. I have read about several entertainers whose luggage or gear did not arrive to a show venue. I have also personally seen Franz Harary create a short illusion show with “nothing” except stuff he found on location and a lot of crew members and pretty girls because his props did not arrive in time. So, many accomplished performers have found creative ways around a challenging situation.

In fact, when I was writing out the show, two things that popped into my mind were: “Ah, it has finally happened to me” and “this will make a good story”.

Experience, strong domain knowledge and a competent skill set all contribute to handling a situation like this. Over my career, I have also handled many difficult and challenging situations. Each time, problems were solved and the show went on.

But, I have a slight confession that will probably make this accomplishment seem much less impressive.

I was actually mentally prepared for such a scenario which explains why I was not stressed and was pretty confident I could pull off the show.

I had often thought about how I would perform a show if I had nothing. In fact, I regularly mentally build a show when I walk through department stores, especially in the hardware, furniture and kitchen sections. So, I already had a bank of possible solutions on how to create a show from “nothing”.

I also knew it was impossible to create a full illusion show in 5 hours. So, I did not even try.

But, the biggest “cheat” for pulling off this “makeshift” show is that it is not 100% new to me. While, it is true that I have never performed this specific show before, the material is not new to me. I also have an existing show that I could model after.

I already have a close-up show designed for stage, “Beyond the Mirror”, that I perform professionally. It is a fully produced theatrical show with effects, routines, scripts, music and lighting design. It works with a table and fixed camera set-up projected on video screens.

While, I did not have my entire show equipment, I did have with me my show attire, all my video camera gear and (as always) a Sharpe, three silver coins and a t****tip. The rest of the “props” had to be bought, made or modified.

I managed to reproduce 60 percent of that show. Other material comprised of effects and routines I have worked on before but had been cycled out of my current repertoire.

Of course, modifications had to be done as many routines utilize specific custom apparatus that cannot be bought “off the shelf”.

For example, instead of Danny Korem’s “Omni Deck”, I made Simon Lovell’s “Heartless Deck” that is his variation of Paul Harris’ original “Solid Deception”. “Solid Deception” works well in a close-up setting where spectators can actually touch and feel the deck. In a stage setting, Lovell’s “Heartless Deck” provides the similar visual impact as the “Omni Deck” so the effect registers clearly with the audience. 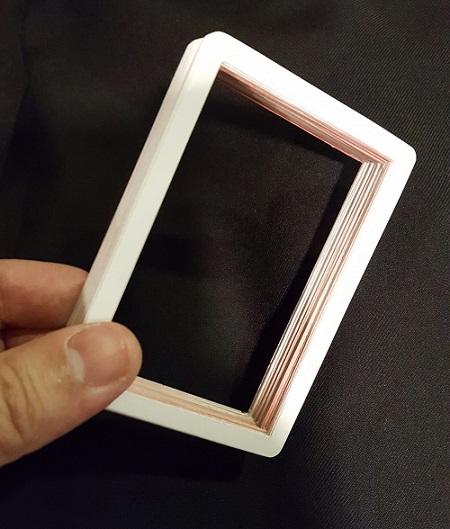 In addition, I worked with the theatre’s house cameras to create visual variety in how the magic was presented throughout the show. My experience in producing and performing magic on TV helped me work with a multiple camera set-up. A lot of the techniques I used are discussed in my video “Filming Magic for Television”.

The show received a strong ovation from the audience as well as compliments later from guests and crew. No one was the wiser that this was a makeshift show put together and performed for the very first time.

Considering the circumstances, the show went very well without any hitches, on my part as well the wonderful production team. I cannot emphasize how important and necessary the professional team was in supporting to create a theatrical show and stage my vision for the show. Without them and the technical support, there would have been no show.

If you are a professional performer, it is worth working on and having an emergency back-up show. Or, at the very least, spend some time to plan and think about what you will do in a scenario where you lose your show. While the chances are very slim that it will happen to you, you never know. This is the first time it happened to me in 24 years of commercial performing.

I was a scout for 10 years and the motto of “Be Prepared” is still something I go by. While I always carry a few back-up items on me, these items are more to be used as replacements for one or two routines if needed; not to create an entire show.

Moving forward, I will pack a bit more back-up items in my carry-on/ check-in luggage. And, I will continue to pack my entire show costume in my travel bag as well.

Even if you perform an illusion show, keep your general magic skills honed and your routines well practiced.

More than likely, before you performed an illusion show, you spent hours, weeks, months and years practicing general close-up and stage magic. Don’t let that go to waste. My years of work in non-illusion magic definitely paid dividends in this show.

In my book, “How to Be an Illusionist”, I noted that most successful illusionists are excellent general practitioners of the craft.

“One common trait that the most successful magicians in the world have is that they all have a wide knowledge on magical techniques, magicians, magic history and products in the marketplace. If you are a specific type of magician like an illusionist, you must put yourself in the top bracket of your illusion craft in terms of illusion knowledge, techniques, design, staging and on all other prominent illusionists in the world.

I have yet to see a top magician who is not knowledgeable in their field. You have to constantly develop and expand your knowledge; in your own field and all related fields. It is a lifelong learning process to be up to date with the latest techniques, approaches and trends in your field, in order to stay relevant and current.”

While I wish you will never be faced with a scenario where you have to create and perform a show from nothing on short notice, with good knowledge, creativity, experience but most importantly preparation, you will be able to get out of the most challenging situations.

While waiting in the stage wings moments before the show, a staff member asked how I would perform magic without my illusions. Without hesitation, I answered “The magic is in the performer, not the props”.

Luckily, she believed me. 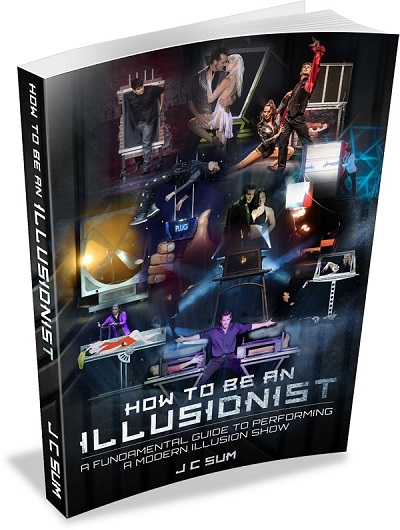