I have had a bit of experience filming magic for TV with a couple of magic series (terrestrial TV and online). But specifically for large-scale illusions, I’ve performed illusions for live and taped TV across the world including in Italy, Japan, China, Indonesia, and Singapore as well as twice on the world-famous Le Grand Cabaret Du Monde in France.

I’ve filmed illusions for my own TV shows as well as guest appearances in tiny studios, large studios as well as on the street and huge closed outdoor sets.

Presenting magic for TV is completely different from live performance. You must approach it by understanding the TV medium and how the camera sees the magic. 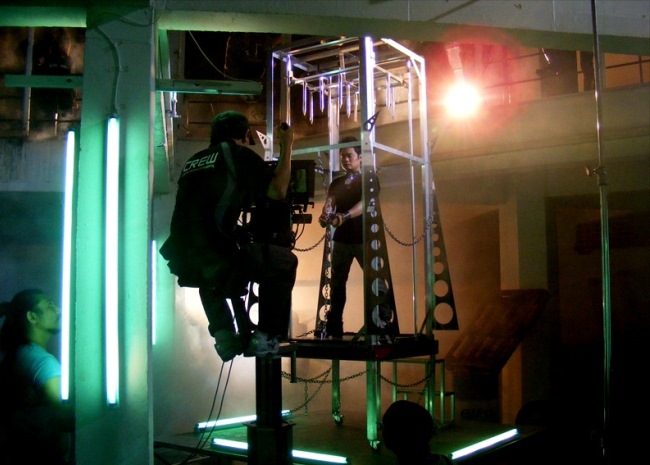 When you are contacted to appear for a television show, here are three things that you should take into consideration:

Find out all you can about the show you going to appear on. Questions you should be asking include:

The answers to the above questions will help you decide how to approach your appearance or whether or not to appear on the program at all. While it is exciting to be invited onto a show, you have to decide whether it is worth appearing on a program that may not put you into a flattering light.

Research the Environment and Filming Conditions

The next step is to understand the performing environment and filming conditions. This will adversely affect your choice of illusion to perform. Questions to ask the producers include:

In a normal TV studio set-up, there will be multiple cameras that a panel director will switch to, throughout a segment. In a professional studio, you will be able to see which camera is “live” indicated by the red light under or on top of the camera lens.

You need to be aware of which camera is “live” during your performance. You preferably would want to discuss with the panel director first and highlight any angle problems that you might have. Or, even if your material is angel proof, you want to know which camera you should be facing during the magic moment.

For example, if you are performing a Sub Trunk, the ideal angle for the camera during the exchange is a frontal wide shot so that you can see the performer(s) on the trunk.

Here are some pointers:

If you want to be 100% safe and to demonstrate your professionalism, experiment with a video camera and film your illusion performance. Work out what type of angles make the magic look best.

Show the producers the footage prior to the shoot or at a production meeting so that they can see what the desired effect should be. While it is unlikely they will follow your shot selection, it will give them a visual idea of what to expect and how they want to shoot your illusion.

The right material is critical for TV magic. As mentioned earlier, you cannot approach TV magic as you would a live performance. Based on the three points highlighted in Planning Magic for TV, you should have an indicative idea of what type of illusions will and will not work for TV.

As a general rule, especially if it is an uncontrolled environment with a ‘one-take’ situation, choose material that is fool-proof. The illusions should be angle proof, imperceptible even with a close-up shot and direct in effect.

If this is your first few times performing for TV, do something that is completely safe. A common temptation is to try to do something “new” and “revolutionary”. The problem is, if you do not have control over filming conditions and are not 100% sure of the material you are performing, there is a likelihood that things may not go as well as you pictured in your mind.

If you stick to material you are very familiar with, you will also be prepared if something goes wrong because you would have likely faced that situation before. This will allow you to recover well but you might not be as sure of what to do if the material is new.

Here are a few other things to keep in mind when choosing material:

TV is a Visual Medium

TV is a visual medium so visual magic with visual effects work best. Long drawn out mental or mathematical type routines will not work well. You ideally want something interesting to happen within 20 seconds.

Your Audience is the TV Viewers

Remember, you are playing to the TV audience and not to the people at the live shoot. While, the natural desire is to fool the people on site, your focus should be making sure the magic looks good to the camera. So, yes, if you have to sacrifice the method of the magic to the few producers and production crew on site, so be it.

Remember, the camera is the eyes of the viewing audience. They see what the camera sees. So play to the camera.

Time also passes much slower on TV. A sequence with not much action that takes 10 seconds live will feel like 20 seconds on TV. So, be concise and economical with your transitions and the build-up of your effects.

WHAT NOT TO DO

If you have the opportunity to perform on television or are working on a street magic TV project or are going to be interviewed on a TV talk show, you might want to check out a video product coming soon. 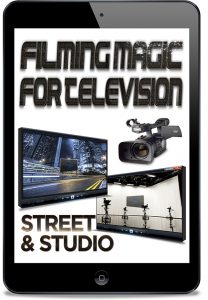 “Filming Magic for Television: Street & Studio” is a 4-hour + information-packed how-to video on filming magic for street magic and magic in a TV studio. It covers, single camera set-ups, multi-mobile camera set-ups and TV studio set-ups. You will learn everything you need to know about crafting and presenting magic on TV.

The video also gives an in-depth look at my 15-episode street magic series for network TV and an audio commentary for the entire series.