If you perform for kids or family shows, a great way to increase your value is to perform large-scale stage effects or illusions in your show. This can create scale for your show and give it more production value than other kids & family magic shows.

Most will agree (as I do) that when it comes to kids shows, the entertainment value for the routine is more important than the actual strength of the effect. While I subscribe to this, it is also no excuse to have a weak effect or prop that is not deceptive or of low quality.

What are the Best Magic Routines for Kids & Family Shows?

The best magic routines are those that combine entertaining presentations with powerful effects and well-built apparatus. This is especially true for larger stage props and illusions.

All kids performers also know that mass interactive routines and audience participation routines work very well for kids. Having a variety of different routines, themes and props in a single show will hold the kids’ attention and entertain the adults at the same time.

The Value of Performing Illusions for Kids & Family Shows

Remember, while your audience is the kids, your paymaster and potential clients are the adults. The overall quality of your performance (both entertainment value, strength of magic and look) will be judged by the adults for repeated bookings or future bookings.

For example, imagine that you are performing a show in a library and there is an adult in the audience who is in the position to book a show for a family day event for his company. Besides just the entertainment value of entertaining the kids, he might assess the show to see if it is suitable for a company event targeted at both adults and kids (employees and their families).

Even, if the show is primarily targeted at kids, he might be more discerning if he is going to make a recommendation; as he in-turn will be judged by his colleagues and his boss. So, he will want to be confident that the show reflects well on him and his company. Like it or not, production value, scale, aesthetics and superficial elements do weigh on one’s opinion when watching an entertainment show.

This is where performing illusions for kids & family shows has value. It has a direct positive impact on your bottom line and brand. Of course, there is a practical aspect to this as you need to be performing in a market that can support a higher value kids & family show to make the investment in a bigger show worth it. Or, you must be willing to do more shows as demand for your show goes up. 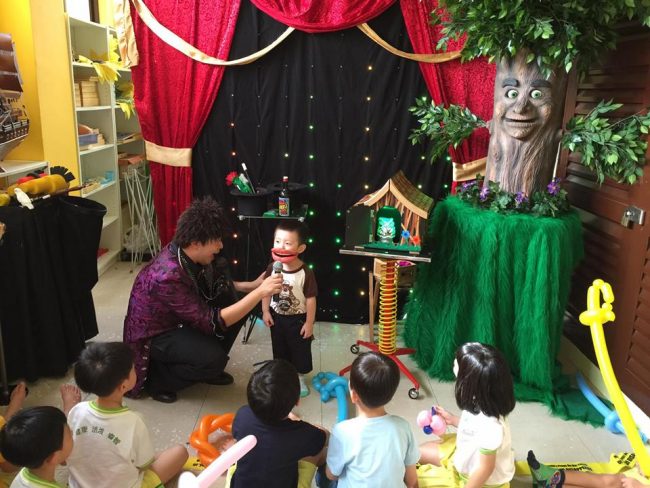 Many of the most popular kids stage effects and illusions have been around for years. Some classics include the “Sliding Die Box”, Bill Paul’s “Fraidy Cat Rabbit”, Milbourne Christopher’s “Forgetful Freddy”, Harry Leat’s “Run Rabbit Run” and The Great Norman’s “Hippity Hop Rabbits”.

U.F. Grant created many illusions and stage props that are still used by kids & family performers today. These include “Arm Chopper”, “Super X Levitation”, “Flying Carpet”, “Temple Screens Production” and “Strat-o-sphere”. Some of his booklets are available as ebooks from Lybrary.com and MAK Magic is still producing several of his props.

Percy Abbott created many illusionettes that can be adapted for kids & family shows that are sold through Abbott’s Magic.

Owens Magic Supreme manufactures many different props and stage effects that are well suited for the kids & family performer but not inexpensive. Jim Sommers is considered a master at designing illusions that pack flat and has pack-flat versions of many classic illusions. 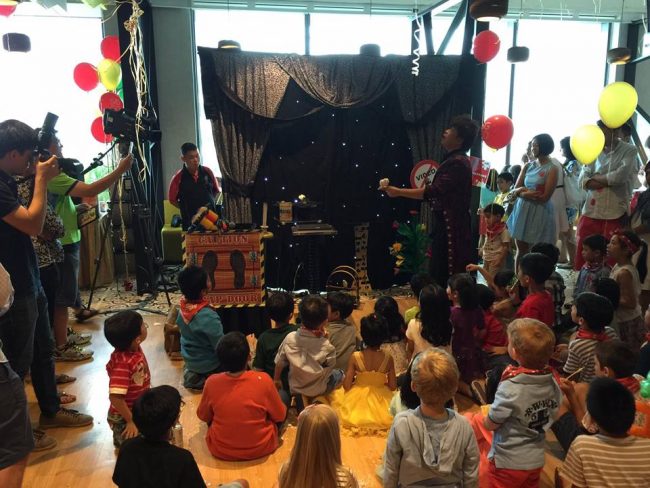 Many of Paul Osborne’s illusions, especially those described in the Illusion Systems series Vol 1 & 2 and The Black Book, were designed for kids & family audiences. However, while themed to that audience, they were created for theme park shows so the props were not designed to pack down or flat for easy transport. In recent years, he has released a number of books for stage effects for kids shows. Wally Reid wrote an underrated book entitled “Magic On Stage” that has many stage props and illusions that are ideal for the kids & family magician.

David Ginn’s “Professional Magic for Children” was considered a must-read text and contains many kids routines with larger stage props. He also has a vast collection of books written specially for this market. Chris Carey’s “Find the Stuff that’s You” (Vol 1 & 2) has solid stage props, routines & illusions peppered throughout the book. Kyle Peron has a great ebook on working with the Chair Suspension illusion for birthday parties and family stage shows.

With creativity and imagination, many classic illusions like the “Sword Basket”, “Zig Zag Girl”, “Mini Kub Zag” and “Modern Art” can be themed to be suitable for kids and family shows. 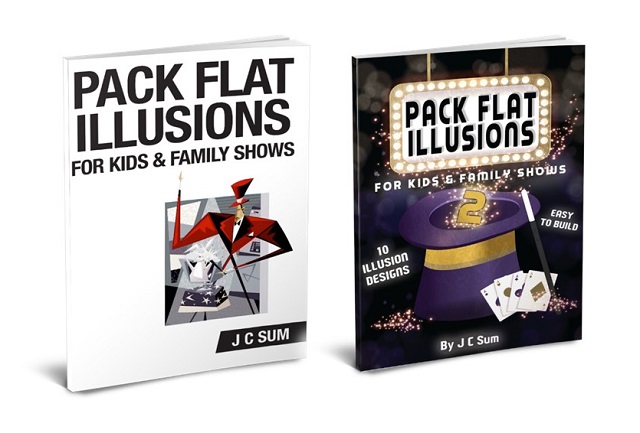 My books “Pack Flat Illusions for Kids & Family Shows” 1 & 2 feature a combined eighteen practical illusions & illusionettes designed for working performers looking to add scale to their kids/ family show or provide a larger scale effect for a special show. The best-selling books feature the illusions routines, presentations and designs are contemporary and relevant for today’s audience.

You can check them out HERE.