This is not a rant or a justification piece but rather an observation with some suggestions. Spend one hour on YouTube and view different illusionists’ videos and you will find this to be completely true.

You will see the exact same illusions, same choreography, same movements and same presentations. Many times, the exact same props are used but with different colours because they are either marketed illusions or pirated. In fact, many of the illusions are pirated, especially by professionals from Europe, India and China. This is sad but not under the scope of this discussion.

Here are 11 illusions that I think are (as of this writing in 2013) too commonly seen in programs of illusionists worldwide:

Technically, the last two are not really considered illusions but I list them as they are larger scale effects and almost everyone performs them.

There are cycles and phases of popularity of different illusions and I actually refined the list since I first wrote this post in 2009.

They are several reasons why illusionists are performing the same illusions:

The flip side to the last point is that anyone including clients, agents and show producers are able to watch illusionists’ performances from across the world and will soon realize that the same illusions are being performed by different people. As a ressult,  there is little differentiation between illusionists and illusionists are perceived to be interchangeable.

I know many will say that the casual lay audience member generally does not see the difference between illusions in general categories of magic anyway. i.e. all vanishes, levitation, exchanges etc are all the same to the casual layman even if the prop or presentation is different. That is generally true… but why use that as an excuse to perpetuate the stereotype that all illusionists perform the same illusions by continuing to perform the same illusions?

Personally, I do feel illusionists are interchangeable at times when I watch the same old  illusions in different illusionists’ videos. I lose interest… and I’m a magic geek. Imagine what an average lay person, who has only an average interest in magic, thinks. Or consider the client or agent who is looking for an illusionist. They would be motivated to go with the one whose fees are the most competitive since all the illusions are the same.

Illusionists will no doubt defend this line of thought upon reading it by saying: “it is not what you do but how you do it!” That is true, but only to a certain extent. Just because you use a different piece of music or smile instead of act dramatic or add a costume change at the illusion does not warrant enough of a differentiation. The people who do matter, especially if you are establishing yourself as a top professional will notice these differences. The people I’m referring to are the educated clients, agents, show bookers and media.

So, there is a need for illusionists to stop doing the exact same illusions… and this is not an excuse to buy pirated illusions of performers who have not released proprietary illusions.

I’ll be the first to admit that developing a full show of original illusions is extremely difficult. The amount of creativity, time, effort and $$$ are all factors that make this very difficult to attain  But, if you are going to do one of the common illusions, do something with the prop design or presentation that makes it appear to be a completely different illusion. Here are 3 examples to reinvent 3 way-too-common illusions:

Modern Art was a good alternative to the Harbin’s Zig Zag Gal and traditional thin sawing illusion until it became too common. Just type in Modern Art in YouTube and you will get 3 pages of videos of this illusion. That is one reason why my partner ‘Magic Babe’ Ning refused to continue performing in 2007.

However, if you can redesign the illusion such that it looks really different, I think it will work. I’m not just talking about theming the prop to look like a phone booth or letter box but really redesigning it so that it becomes more deceptive and looks almost like another illusion. I’ve know of 3 versions of Modern Art where the grill arm under the table has been removed and the girl’s head is on the outside the top of the cabinet. These changes actually make the illusion look completely different and new, although the methods may be about the same. In fact, I do perform the “Modern Art Reloaded” illusion with a few additions.

Gunter Puchinger’s Mini Kube Zag is a neat illusion but is also way too common. The bare-bone basic model is the ultimate cliche ‘girl in box’ illusion. One solution may be to give it a highly themed look and presentation. Smokey Mountain Magic does great design work for this particular illusion and can really theme the prop beautifully. However, unless you have a very solid, logical presentation that is not cheesy and can complement the prop, you will just have a beautiful looking prop that only magicians appreciate.

I think that the best redesign of this illusion to make it look almost unrecognizable and fresh is Michael Barron’s Kube Zag which he calls “The Device”. Coupled with his excellent presentation and choreography, it is a great re-invention of the illusion. Check out his video on YouTube.

The Packing Crate Sub Trunk is also one of the, if not THE most commonly performed illusion because it is also considered by many as a great entry-level illusion. The inherent illusion is fantastic, but it is just way too common. Also, as far as I’m concerned (and most people in the industry), this illusion is ‘owned’ by the Pendragons. For those who cannot achieve the same speed and look, they just look like inferior clones of Jonathan and Charlotte. For those who can, what’s the point? The Pendragons did it first.

In Europe, several performers, most notably Hans Klok (again!) do a sub trunk with a cylindrical box. It looks different enough and it allows for a very fast exchange – which I personally believe is the essence of the illusion. I do not buy into propositions that the exchange need not be fast to be effective. In this illusion, speed is everything and what makes the illusion visually spectacular.

I avoided the packing crate sub trunk for the longest time in my career because I felt it was too common, until I designed “Crystal Metamorphosis” which I have almost perfected with Ning. As I highlighted in my book “Urban Illusions”, where this illusion design is detailed, everything about this version of the sub trunk allows me to create the perceived Pendragon-like speed because of the design & visual and psychological aspect that the prop is completely clear. 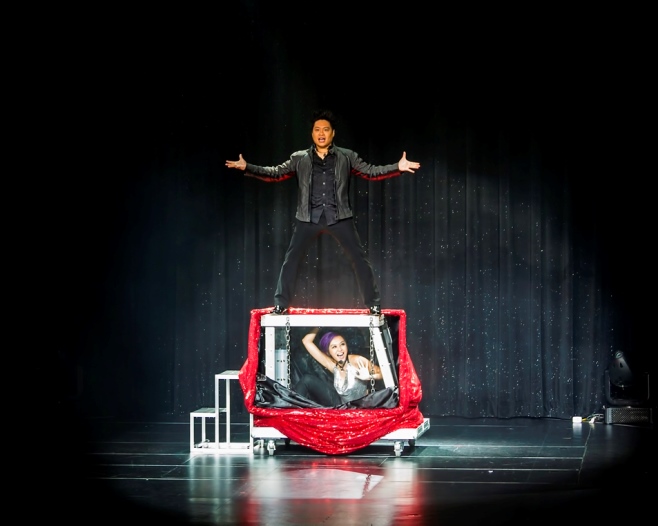 This entry is beginning to sound like a rant… but it is not… well maybe just a bit. The point it… for the sake of the art and yourselves as proud illusionists…. take these too common illusions out of your shows/ videos (for now) or try to redesign them so that they feel different. Remember, everything old will become new again in the future